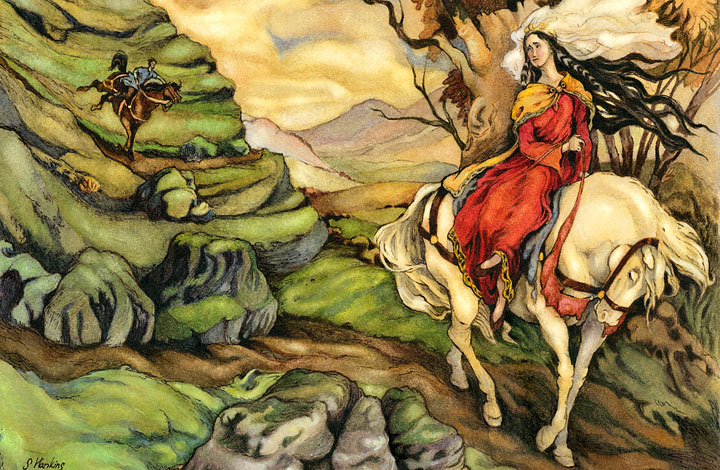 Old Welsh Mythology has a story about how Pwyll Pendefig Dyfed saw Rhiannon, the most beautiful of women, leisurely riding her pure white horse, but every time Pwyll tried to get closer to her she seemed to go further away, even though his horse was galloping and Rhiannon’s was only trotting.

I’ve written (somewhere!) before about how I believe Labour should take responsibility (in large part at least) for the rise of Ukip and the mess that we find ourselves in.

My thesis is that the political centre ground is pretty much the same as Rhiannon on her white horse, the closer you try to get there the further away it goes.

Politics doesn’t exist on a set left-right axis, with a constant centre point. It shifts and when political parties shift their views and ideologies, then the whole axis shifts as well.

As Labour tried to capture that elusive centre ground – by aping many of the Conservatives policies – what in fact happened is that it shifted the political debate rightwards. The Conservatives, who were once seen as right wing, all of a sudden found themselves in the ‘new’ centre, and the far-right, who were previously beyond the pale, came into play once again and became legitimised.

Yet for all their short term electoral success Labour were in a pickle. Labour’s one and only election slogan is that they are not the Tories. They have a profound hatred for the Tories, one which today seems irrational and illogical seeing as they sound so much alike. However this profound hatred meant that they could not simply cherry pick Conservative policy and present it as their own, they had to dress it up in Labour clothes, make it superficially attractive to the Liberal left, and present it as a leftish policy. Yet they were fully paid up members of the neoliberal project and fully embracing capitalism. Deregulating the City is a prime example; supporting the privatisation of state owned services; PFI; City Academies, and many others (see this post by Another Angry Voice for a comprehensive list). Right wing Conservative ideas presented as New Labour.

The Conservative Party has always had a far-right fringe, one which has by and large been kept in it’s place on the fringes because of that party’s attempts to titillate the centre ground. However with Labour’s right wing lurch and the Tories all of a sudden finding themselves camped firmly in the centre ground, their far-right became the right. Far right parties who had also been on the fringes were now being normalised, and accepted.

The political axis had shifted rightwards. Things which were previously only whispered started to become part of political discourse. “I’m not racist but…” became the norm.

Unlike Labour the Conservatives, on the other hand, have no such qualms about taking policies from others.

This week, while we’ve heard talk from Theresa May about her party being on the centre ground of British politics, we have also heard some worrying policy ideas, such as forcing companies to list their foreign workers. As Nicola Sturgeon said on Twitter:

We seem to have woken up with a UKIP government. Depressing doesn't even begin to cover it. pic.twitter.com/O8DYc6smdE

They’ve openly adopted what were once deemed to be far right ideas and rhetoric, and presented them at their annual Party Conference, put forward by the UK’s Prime Minister.

With the centre ground forever shifting rightwards, far-right ideas and rhetoric are increasingly legitimised and used in every day political discourse.

So what of Ukip?

This is the reason for my posting this today.

Unlike the Conservatives following the dog days of New Labour, Ukip haven’t suddenly found themselves on the new political centre ground. The Tories have not just aped them, they’ve stripped them of their purpose. With Brexit and a new Conservative Government propagating Ukip style policies, what’s the point of Ukip?

Some might say that they should just be allowed to wither away as a political party, with members joining Theresa May’s Conservatives. This might well be the case with a few members. But the problem with politics is that there are too many egos involved. Ukip, if but for a very brief period, used to be a relatively big beast. They gained nearly 10% of the vote in 2015. 52% of those who vote in the une referendum voted for their raison d’etre. They have a handful of Assembly members and a rag tag group of MEP’s. There are a lot of people with a lot going on Ukip. They need Ukip.

And Ukip needs a reason to exist beyond Brexit.

My fear, my very real fear, is that in order to find a reason to exist Ukip will lurch even further to the right, dragging UK politics with it.

As professor Richard Wyn Jones points out, English Nationalism is on the rise. The question is what form will this nationalism take? We’ve had clues in recent months, with an increase in racist attacks and abuse. The other question is who is there and ready to give political voice to this new development?

Ukip (and Farage) have already shown their willingness to pander to nasty, xenophobic ‘Nationalism’ (I personally think it’s supremacisim not nationalism, but this the term used in politics today)

With UK politics rightwards march we are now only one small step away from Fascism.

The language we are hearing echoes that used nearly one hundred years ago in Italy, Germany, Spain and by Oswald Mosley.

Ukip is not a Fascist Party, as has been pointed put by Hope Not Hate, but in order to re-find their purpose, in order to find new political ground, there’s a very real danger that they start to copy and develop ideas which one might associate with fascism.

This is why we need to be careful. This is why we need a strong left alternative to bring politics back, and especially why those in power (Theresa May, Amber Rudd et al) should be very careful about not pandering to xenophobic, chauvinistic and racist calls just to firm up their vote for short term gain.

Which is why I’m with Plaid Cymru.