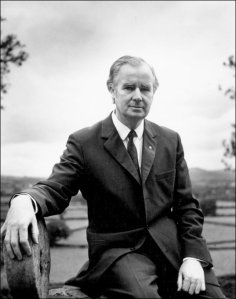 I’ve already commented on the S4C saga, and others have written extensively on the subject.

Even though the media have long since moved on to other issues, the troubles surrounding the channel persist, and its future and its enormous contribution to our culture and economy is still threatened, therefore we need to continue with the campaign.

But let’s cast our minds back to November. You might recall back then the S4C debacle was getting column inches in some of Fleet Street’s finest, and the Welsh Conservatives were quick to inform us of the fantastic work that they were doing in securing the channel’s future.

Consider these words from Glyn Davies MP for instance,

Watched the Politics Show today, when Alun Cairns, my fellow MP, was in excellent form. Alun has been terrific on this issue (S4C), along with other Welsh Coalition MPs… I can inform readers of this site that without the determination and guile of Welsh Coalition MPs, the future would have looked rather more bleak.

In November people were queuing up to remind us of how hard the Welsh Tories were fighting for S4C, specifically Glyn Davies, Guto Bebb, and Alun Cairns. The overt implication being that things would be much worse without them and that we should be thankful.

Then this, again by Glyn Davies,

Its a pity so much publicity was given to the non-payment of the licence fee though. This sort of talk makes the lives of political friends of S4C more challenging.

With others such as Lord Roberts of Conwy saying that people should not take direct action in support of S4C (the Tories and Lib Dems make easy bedfellows).

This was the face of ‘moderate’ public debate, implying that those in favour of direct action were on the fringes. This is the narrative that has been dictated by the British establishment, one which informs us that they are working hard for us and that we shouldn’t rock the boat because that would work against us.

Why am I referring to the way that the establishment has conducted this recent debate about S4C now? Simply because it echoes with history and history, once again, teaches us some valuable lessons.

This is what the then Welsh Secretary had to say,

“the change had been made in response not to violence but to moderate opinion following very wide consultations in Wales”.

This is the version of history that has been forced on us ever since. We were told that S4C came to being because of the work done by Wyn Roberts, Gwilym Prys Davies, and Archbishop GO Williams. Now I don’t for a second doubt the contributions of these men, and I accept the importance of their contributions, but…

On the 30th of December 2010 the Government released papers relating to the Conservative Government of 1979 under the 30 year rule.  They show quite clearly that it was Gwynfor Evans’ threatened fast that was the key factor in their decision to establish S4C.

According to Willie Whitelaw, the then Home Secretary, setting up S4C would,

“have the advantages of…. persuading Mr Gwynfor Evans, the leader of Plaid Cymru, to withdraw his threat to fast to death”.

This crucial deciding factor however was kept very, very quiet, and over the following thirty years we have been led to believe that we should thank members of the establishment, people that didn’t want to see any disturbances, respectful people.

The truth however is a whole lot different.

This is the exact same message that the British establishment is telling us today, as noted by Glyn Davies MP above. But history shows us that direct non-violent action can be effective.

Who will you believe today? Is it what politicians of the establishment tell us, or what history tells us?

I know who I believe.