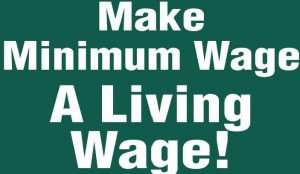 Parts of Wrexham have double the UK level of low pay, according to new research published by the TUC today (Monday 23 February) as part of their Fair Pay Fortnight campaign.

“We are told that the number of those unemployed has fallen, but what we are not told is that real terms wages have fallen, zero hour work is on the rise and in-work poverty is on the increase. Giving people a Living Wage would be a huge step in eradicating foodbanks, which fed 1800 children in Wrexham last year.

“When I was selected as the Plaid Cymru candidate for Clwyd South, I said that one of my key policies if elected would be to fight for a Living Wage for all. The release of this research by the TUC proves again why this is needed. The current economic policies of each of the other parties is geared towards the City of London. Two weeks ago they all voted to allow austerity to continue for another five years, while Plaid Cymru voted against austerity.

“Wealth inequality is on the increase and, according to Oxfam, 1% of the world’s population will have 50% of its wealth by next year. We have a choice. We can sit by and let that happen or we can make our voices heard; support our neighbours and communities; and insist on a Living Wage, and make a difference in May”.