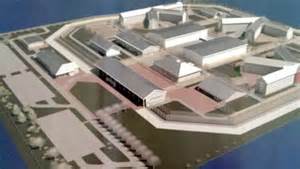 We now know who’s won the contract to build the new Titan Prison on the outskirts of Wrexham.

The successful bidders were Lend Lease, a multinational firm based in Australia. My friends over at Plaid Wrecsam have more on this firm here.

North Wales needs a prison. Plaid Cymru – the Party of Wales have been campaigning for some time for a north Wales prison, with both Hywel Williams, Arfon MP, and Elfyn Llwyd, Dwyfor-Meirionnydd MP leading the way. We need a prison to accommodate offenders from the region, so that they’re placed nearer to their home and their families and in an environment that caters for their linguistic needs as well. All of which helps with rehabilitation. A medium sized prison, suitable for 500 inmates, would be a positive development.

We do not need a Titan prison.

Titan prisons don’t work. They are so ineffective that authorities in Texas are closing them down, and France has decided that they are not the answer either. As a form of incarceration it has failed.

Coupled with the fact that Titan prisons don’t work, it is likely to be a privately run prison.

While I favour a medium sized publically run prison, the Government have decided to go for the opposite, which is less effective and will eventually cost more as well.

The problem with Titan prisons is that rehabilitation doesn’t work. The point of a prison isn’t vengeance and taking someone’s liberty away to teach them a lesson, but instead it is to rehabilitate offenders and assist them to play a constructive, positive role in society. This government seemingly doesn’t care, and is only interested in locking people up, only for them to re-offend again later. Such prisons are, unfortunately, like a revolving door.

We’ve already heard politicians talk up the prospect of the prison bringing jobs into the area. Don’t believe them.

Staffing levels at Titan and private prisons are lower than publically run and medium sized prisons. It is a dangerous environment for both the inmates and the staff.

A prison service should be a public service, not a profit making venture. Public prisons have higher staff/prisoner ratios. Because of the dangerous nature of such a prison and the probable under staffed scenario the likelihood is that staff moral will be low, resulting in a high-turnover of staff, which will eventually mean having to search for prison staff from else-where.

This is simply a cost-cutting exercise by the Government, trying to save money in the short term while also implementing their ideology of privatising everything in the public sector, regardless of the eventual impact and cost.

To see how private companies in the prison system work we only need to look at Serco and G4S. Both are at the centre of a huge fraud scandal surrounding tagging prisoners, and forcing a young woman who miscarried her child to clean out her own cell, amongst a number of other high profile scandals. Because of their desire to maximise profits, private prisons cut corners. The Howard League for Penal Reform recently called on the Government to halt the privatisation of justice, saying that private prisons are the worst in the country .

We have also seen riots break out in our largest prisons recently, with HMP Oakwood being the latest example.

Finally, if the prison was to be called HMP Wrexham, or carried the Wrexham name, and a similar riot or controversy broke out (as is highly likely), Wrexham itself would also be tarnished, impacting on the tourist trade, and the people of the area.

Build a publically run medium sized prison for both sexes and young offenders, yes. But not a Titan prison which does not answer the needs of the region and will be detrimental to us and society in general.